What are 'ghost newspapers'? And how to find them.

The buzzy term is “ghost newspaper.” Whether the legacy paper in any given market fits that definition is a matter of debate, but it’s clear that many local papers were shadows of their former selves, even before the devastating hit of the Coronavirus. This is the first of a series on entrepreneurs who have been filling these local news gaps.

An increasing number of news entrepreneurs have sprung up to create a business model where publicly-held consolidators and weakened family owned companies have cut back on news. These relatively smaller newcomers are now digging in their heels to survive the pandemic.

The problem of ghost newspapers hit home recently when I profiled Doug Medlin, mayor of Surf City, for a magazine near Holden Beach, North Carolina, where I live.

Surf City still has a press table at council meetings, Medlin said.  But it used to be filled with three or four reporters from the Wilmington daily and local weeklies. But even before social distancing and mandated group limits, the table was almost always empty of press except for an occasional reporter for the Port City Daily website. 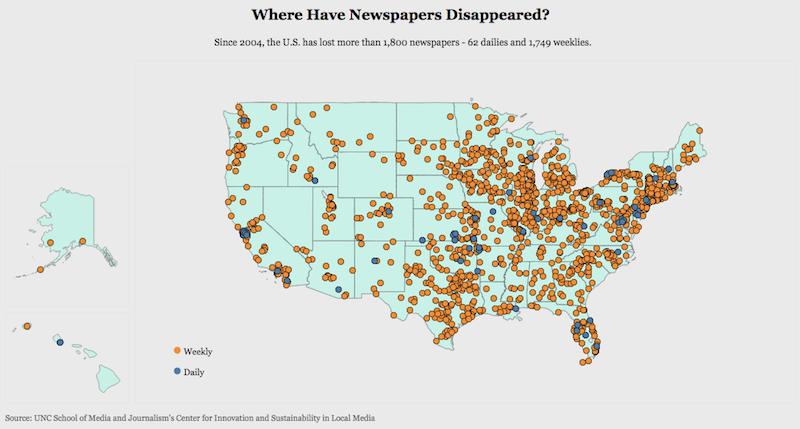 Medlin wasn’t especially happy with how the Port City reporter had covered him in Surf City’s last election, but he respected that at least someone was trying.

There are all-too many places in America where reporters don’t show up anymore.

These communities aren’t news deserts; they do, in fact, have newspapers.

“It’s a newspaper that says it covers a community but extracts more than it puts back in. It’s the leanest possible operation that puts out a print product, generally one or two local stories on the front pages with mainly regional and wire service content. It’s possibly and probably designed and printed somewhere else with a really early deadline. The commitment to the community is in name only. It’s a zombie newspaper, without any real animating force.”

The “animating force” is the quantity and quality of local news, and that means reporters who connect with police officials, mayors, city managers and school board members on an ongoing basis. At many local media outlets, those days are gone,  turning news coverage into something far-too dependent on tips and press releases.

“The big public companies show a lack of vision and execution, and because of their debt, they’ll continue to cut. The question should be, ‘what do readers want?’ If you don’t have much actual local content, there’s no reason to read it.”

Fortunately, across the country, the decline of traditional media has given rise to an increasing number of mostly digital-only start-ups.

Krewson believes some of his association’s members are solving the puzzle. He worked himself for almost eight years at the Tribune Company’s Allentown, Pa., Morning Call before teaming up with digital media entrepreneur Jim Brady and then taking the leadership role at the LION association.

“I’m focused on trying to improve local news as a small business,” he said.

“What we’re seeing is that those [the start-ups] who pay the most attention to their audience tend to be the most successful.

“They need to have a mix of revenue. We have members with websites. We have members that are only e-newsletters. We have a lot of members tied to digital advertising as sponsored content and relationships, not just eyeballs on your home page.”

Doctor himself plans to unveil a digital local news platform later this spring. Though sketchy on public details, Doctor said the platform will be digital only, mobile first with an app, exploit revenue opportunities from members and sponsorships. And, he added, he’ll make it scalable.

“We’ll see if it works,” he said. “One of the reasons we have not seen suitable replacements is that they’re too small and not offering enough value proposition.”

It’s not only digital-only models moving into the territories where the traditional news source has retreated. For example, Adams Publishing Group started up a print newspaper in an underserved area in rural Idaho, against the existing morning newspaper, in 2019.