The rise of the Micropolitan newspaper

For sheer gumption, no newspaper company quite compares with Adams Publishing Group (APG), which launched a new daily in Bingham County, a rural area in eastern Idaho, in early 2019.

What exactly are they thinking?

Founded as recently as 2014, and mostly family-financed, APG has acquired newspapers at an astounding clip since then: More than 20 dailies and 155 non-daily newspapers and shoppers in 20 states, in a total of around 15 transactions. Most are in micropolitan markets, ie areas with less than 50,000 residents.

An excellent article on the family by Rick Edmunds in Poynter, unearthed a PowerPoint from a rare appearance by Mark Adams, CEO, at an Inland Press Association conference in 2016. It shows the company aims for EBIDA goal of 15% and while the family does not release financial information, I heard through a third party that all 170 of their properties are profitable.

In any case, what kind of model works so well that a rural start-up in 2019 seemed like a good idea?

Eric Johnston, president of the Western division that includes Idaho, told me that while there are no hard-and-fast rules for APG acquisitions, the group looks for family-owned newspapers without broadcast competition, and which have not yet “gutted their newsrooms or operating staff.”

Markets get bonus points if they are home to a county seat, a college, and/or an incoming industry.

APG owns a variety of other companies, so investing in newspapers - an industry so radically disrupted - was a dramatic choice, even for a family with a net worth estimated at $1 billion.

Another document in the Poynter article holds a clue. In it, Steve Adams, who owns APG along with his brothers, including Mark, CEO, outlined his investment philosophy back in 2006, while still attending Stanford Business School:

“The opportunity should have many of the characteristics of a franchise; namely, protected territory, inelastic demand, unlevel playing field, and difficult barriers to entry.”  Sounds like a small-town newspaper to me.

APG liked what they saw in rural Idaho, where they acquired 13 newspapers large and small.

But this spring when Johnston’s division decided to start-up a five-day daily in rural Bingham County, it took industry-watchers by surprise.

Compared to dream markets like Aspen and Jackson Hole, Bingham County does not look especially promising.

There is no tourism to speak of. The biggest university is a massage school. The largest industry is health care and social assistance. Plus, there is the competing daily, the Black Foot Morning News

However, the market is right-sized. There are 47,000 residents county-wide with 10,000 residents in Blackfoot, and no TV stations in sight.

It has also had a bit of healthy, though not stratospheric growth. The city jumped 83 spots in Policom’s micropolitan index in 2018.

Plus Blackfoot is strategically located on the only highway between two other APG newspapers, the Idaho Falls Post-Register and the Idaho State register in Pocatello, about a 30-minute drive from each.

If you draw a Venn diagram of the circulation area of the Post Register and the State Journal, the overlap would be Bingham County (see the image above). The new paper could use the nearby printing plant and share distribution routes.

As an edge city, Black Foot also benefits from the economic drivers of Idaho Falls and Pocatello   - an airport, a university, and corporate headquarters - that Bingham does not have.

Pocatello is the lucky destination of the new FBI data center, which has turned it into a bit of a boom town.  Widely perceived as an attempt to dismantle the “deep state” the move is also considered a cheaper alternative to building in D.C.

“They are hiring hundreds of professional staff, many of whom will make upwards of $100,000. You can do really well in Eastern Idaho at $100,000. They can’t build houses fast enough,” Johnston said.

Pocatello, which exceeded the micropolitan population mark in 2000, now has around 55,000 people.  A competitive TV station, KPVI, based downtown covers all of Eastern Idaho, all-be-it at the granular level;  they posted a Potato spill on U.S. Highway 30 as this article was written. 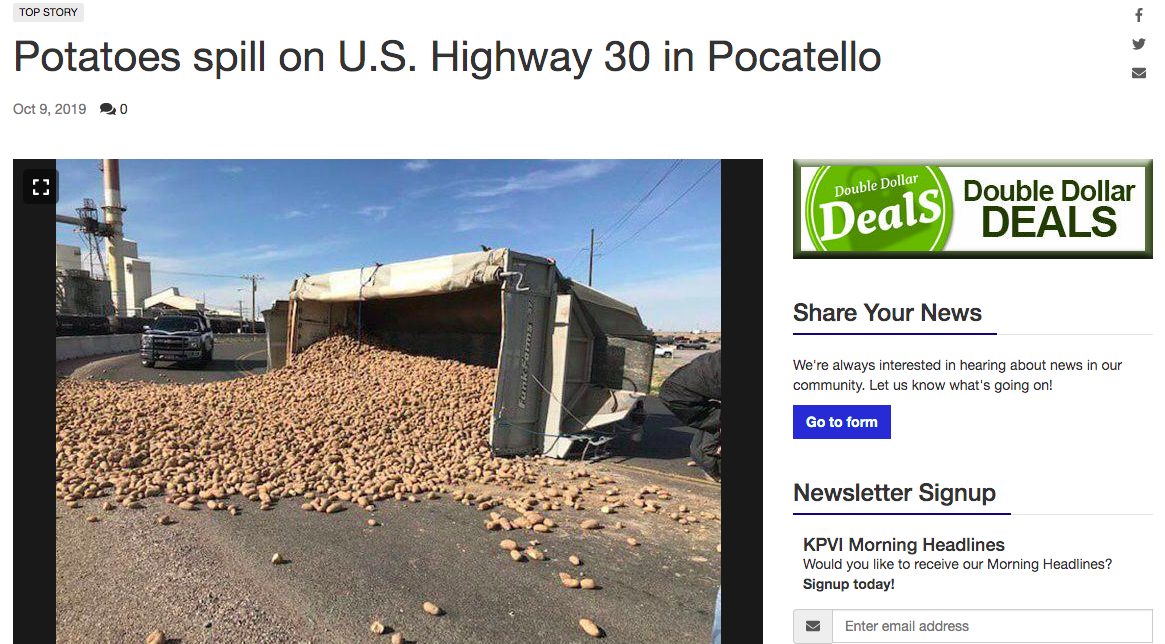 KPVI had also recently covered the struggles of the Blackfoot Morning News in a four-minute segment, “What the heck at the Black foot morning news,” featuring interviews with fired and laid-off employees complaining of inserts and magazines left sitting on palettes in the press room.

To Johnston, the distressed local paper signaled opportunity. “In all candor, we thought,  we can do better for the community, so let’s do it.”

Today the new Bingham Chronicle runs eight pages of strictly local news; there is no national or international news, no sports, classifieds, weather or cartoons. Those features are part of the larger, neighboring dailies– the Post Register and Idaho State.

To start, the Chronicle was simply delivered along with the existing newspapers to the 1,600 paid subscribers who live in Bingham -- the audience in the intersection of the Venn diagram. That number is now almost 3,000, exceeding the published circulation of the BlackFoot Morning News, meaning they can qualify for legal notices.

New subscribers are charged an introductory rate of $10 a month and asked which of the other two papers they want to be included with their subscription.

Subscriptions for online, print or both are all the same price.

“We said content is king and changed our culture. For years, newspapers have charged people $10 for print, and $5.99 for digital, but it’s the same great stuff. We had devalued our content.”

The Bingham County Chronicle’s staff is small, about four or five writers and sellers working out of a small office in Blackfoot.

Drivers from either paper, coordinated to deliver the three products, may literally cross each other on the same block in Blackfoot, but Johnston plans to “get fancier” later on by figuring out distributing both newspapers in the same car.

Meanwhile, in the western part of the state, APG began expanding Idaho Press in Nampa - purchased only in 2017 - into Ada County, home to Boise, and the most urban and populous city in the state.

“Out in Boise and Nampa, you have major corporate headquarters moving in because the land is cheaper. Unemployment is under 2%,” Johnston said.

Adams had already acquired the Boise Weekly, which covers the rich and A&E scene. To add editorial heft they opened an Idaho Press State Bureau blocks form the state’s capital building and hired a well-known reporter to staff the beat. The statewide reporting generated is now carried in all the APG’s Idaho publications.

Two years ago the Boise-based McClatchy-owned Idaho Statesman, moved its out-sourced printing to Twin Falls, where it no longer has the window to cover Boise State´s Saturday night football in time for the Sunday print edition.

The Idaho Press, which runs on its own printing plant can.

“Football is a religion in Central Idaho.”

To highlight the local coverage, the Idaho Press marks Every local story in ADA county with a burgundy box.

“It seems small and simplistic, but you’d be surprised at how many people are astonished that we have so many local stories. We really believe that content is becoming king again.”

More importantly, new subscribers in Boise drove a 40% increase in the circulation of the Idaho Press, so high that, initially, the big pre-print advertisers did not believe the numbers. In addition, 30% of the new subscribers chose digital only.

Both expansions are self-sustaining, driven primarily by circulation sales, Johnston said. The meter on the Nampa website is set aggressively to kick in after just one story.

Johnston says that when he looks at the future, he expects revenue growth to continue to come from subscriptions and the commercial printing division.

“Consumer revenue is the biggest opportunity. We have to say to editors, ok, can we get content that gets people to pay $15 per month? $20? 30?” he said.

“When we look five to ten years out, I don’t see the growth in banner ads. It is going to become more self-serve. You can geo-target on your own.”

Ironically in an increasingly paperless world, APG´s commercial printing division is one of its two main sources of revenue growth. Besides printing other local newspapers and magazines, one of Adam’s presses in Washington State prints and packages hundreds-of-thousands of units of custom wrapping paper over the holidays.

Johnston says APG does have a revenue-producing events department that publishes High School Sports Stars, 20 over 60 Prime awards, and a cooking school. They invested in a ticketing platform built by Geotix, to support its own and other local events. Still, events accounts for less than 5% of total revenues.

Some APG markets have also launched digital agency services, but Johnston plans to keep the focus in Idaho on print.

“I don’t know if I have the scale or the markets… We have brand and market share so why would we jump into really bloody water. Everyone is selling that stuff… I personally struggle to see the business model, it is so easy for it to become a cost center.”

Like the other newspaper publishers we talked to, Johnston thinks part of the secret sauce to sustainable growth is private family ownership, which has allowed them to take advantage of these unique local opportunities.

APG equity is split evenly between patriarch Steve, and his four sons, including Mark Adams, the CEO.

APG also has a stated goal of keeping corporate costs under 1.5% of revenues, which pretty much eliminates the formation of a bureaucratic structure at the top.

The family-owned corporate style is deceptive because while many acquirers are regional, scooping up distressed competitors nearby, APG’s company is national, spanning the country. But while it runs with a disciplined formula - lower overhead, investment in exclusive editorial that drives consumer revenue, focus on home-run markets, keeping your printing press - it also has an interesting fluidity. There are no “1 percent cuts across the board” to make the numbers.

“I was just discussing this with a colleague who works for another family-owned newspaper. What you find is a similar operating philosophy. Of course, we look at the industry to ensure we are right-sized with compensation relative to revenues and so on. But one thing we all have in common is the ability to be agile and flexible,”  Johnston said.

“I’m not sure how many publicly-owned companies would have the ability to expand into a neighboring market. It may not sit well with shareholders.”