The good, the bad and the ugly is mostly good

Among the dozens of start-ups in the trust space, NewsGuard’s initiative to combat fake news, founded by Steve Brill and Gordon Grovitz with $6 million in venture capital, shows the most promise.

The tool is already available for desktop browsers, though not on phones as yet. Just find the app on iTunes here and follow the same process as adding an ad blocker: Download the app, go into your browser preferences and select the NewsGuard icon. The next time you Google a story, the ratings will appear: 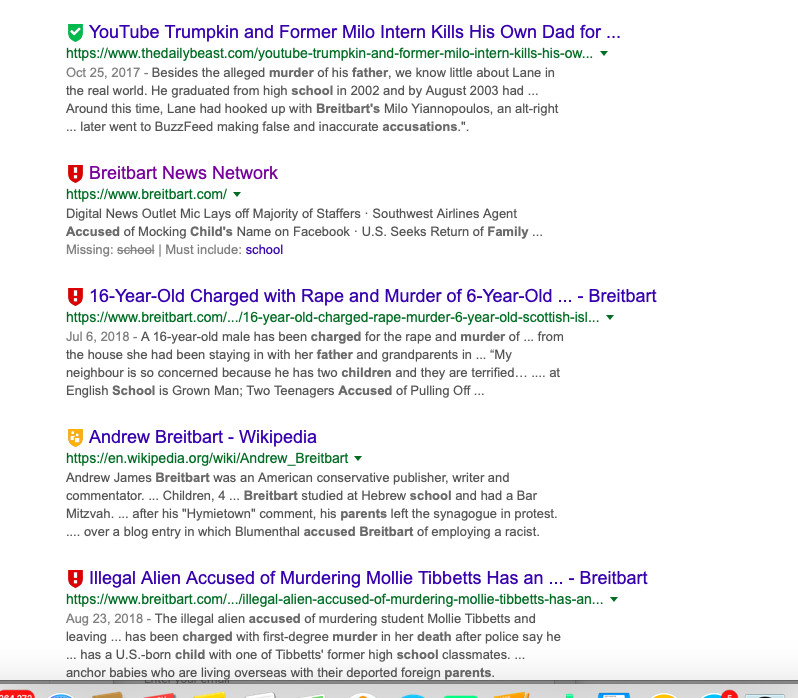 There is also a button on the home page to submit a site.

The team of analysts has reviewed and rated 2,000 media sites, or about 96% of online news and information sites, Brill said. The company adds about 50 more per week, working off a list of the "95% most engaged sites... whether they want to be rated or not."

The business model is to license the platform to Facebook and Google. A deal with Microsoft is already in place and talks with the other major players are underway.

The models has a lot of strengths along with a few soft spots. On the plus side is the basic approach: Using human analysts, rather than mysterious algorithms, to rate news and information sites based on transparent criteria found on the NewsGuard site.

Each media is assigned a "nutrition label," an icon that is either red for warning or green for safety. An orange (soon to be white) icon marks sites which publish other people's content such as Youtube or Wikipedia.

For news geeks, NewsGuard's nine criteria are divided into two groups: accuracy and transparency. Standards for accuracy include whether the site repeats false information, reports responsibly, avoids misleading headlines, has an adequate corrections/remedy policy, and separates news from opinion.

Criteria for transparency include revealing ownership and conflicts of interest, clearly labeling what is advertising, and providing information about the content creators.

Any publisher can challenge their rating and post the challenge publicly on the site. Only two so far have done so, the palmerreport.com and waynedupree.com. One on the left, one on the right, creating a lively debate with the editorial team.

Another critical choice was to exclude bias from the rating criteria - it is still discussed on on the media's profile page - implicitly acknowledging how all media have bias, although if you substitute "values" for "bias" the idea is easier to swallow.

The concept of objectivity is deeply embedded in the journalistic culture. For example, Ethical Journalism Network, which has identified 400 ethical codes for journalism worldwide, boils them down to five basic codes, including "impartiality" and "humanity." By eliminating these last two, Newsguard's nine criteria provide a more useable set of standards.

Some backstory here: The idea that news should be impartial conceals a traditional bias towards "what government says," and has been eroding for decades. A few highlights on the timeline include Fox News naming Roger Ailes, media consultant for the Republican Party, as its president in 1996; the failure of mainstream media to challenge the entry into the war in Iraq in 2001 spawning Keith Olberman’s subsequent transformational ascent at MSNB; the birth of Facebook as a social site for students at Harvard in 2004; the launch of left-leaning aggregation site Huffington Post, whose audience surged easily past the the venerable 100-year-old Washington Post, in 2005; the founding of Twitter in 2006; the launch of Breitbart in 2007; and the rise Tea Party movement and its embrace by FOXNews in 2009. That only takes us up to 2010. Donald Trump would not question the president's birth certificate, using FOX to spread the rumour, for another year.

By 2016, as the newly-renamed HuffPost sank in its soup of opinion and celebrity news, the Washington Post sprang past it again, topping the 76 million audience marker. Fact-based, multi-sourced, original political reporting seemed to have caught on anew, but by then the media universe had irreversibly changed. Bots and fake news sites foreign and domestic were habitually trolling a country divided into right- and left- leaning TV, radio, and social media echo chambers.

As analysts have pointed out, people can now read, watch and believe the media they already agree with, facts be damned. However, there is also evidence of a growing appetite for understanding what information is "real" and where it came from. Under a recent Facebook post showing a picture of Trump failing to raise his right hand over his chest at the Bush funeral, a comment from someone acknowledging an anti-Trump bias also warned that an unsourced image can easily be photoshopped. It was. Newsguard’s scoring system brings facts back into the conversation at scale by leaving bias out of the equation.

The other welcome innovation is the weight, four of nine points, given to disclosure - or lack thereof - of ownership, of conflict on interest, of the background of content contributors. People want to know if a piece of information on Facebook came from a journalist, a Russian troll or a fake new site sponsored by a corporation with an interest in the issue. A red and green shield on each piece of information is comforting whether you are planning to share or to quote another publisher.

The scoring system is not perfect, however; it tends to conceal important differences between major news outlets behind the overly broad red/green tags.

CNN, MSNBC, and FOX, for example, are all tagged green for safe. Only if you click on the tiny green shield do you see that FOX has three of nine criteria marked red. 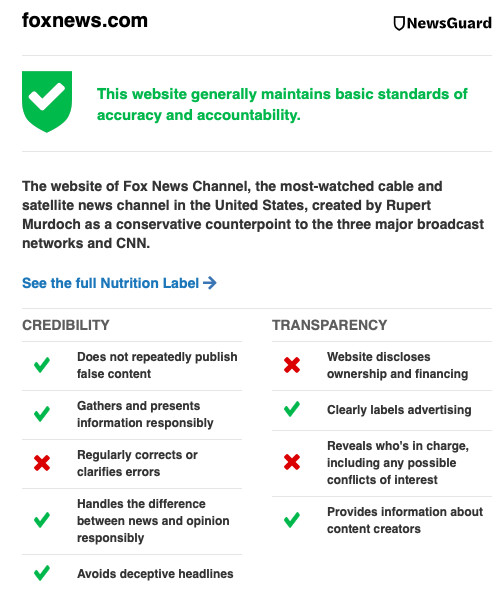 MSNBC has two of these three issues, and CNN has a perfect score. So NewsGuard may be more helpful in weeding out rogue media sites than distinguishing between the largest media, or whose reporting is better and more in depth, rather than merely accurate.

Even Breitbart could shift its status from red to green merely by disclosing its ownership, according to a recent podcast with the co-founders. They claim the criteria incentivise media to get better at disclosures, "we want them to game the system."

When asked if adding a "yellow" light would make differences more obvious, Brill said via an email interview that the company "may end up releasing the exact point scores for everyone a few months down the road." Points are already transparently assigned for meeting each criterion.

And there are also some murky areas in the scoring; what exactly does it mean for a publisher to "gather and present information responsibly"?

According to the NewsGuard website, this criterion is defined as having information providers who "generally seek to be accurate and fair in gathering, reporting, and interpreting information, even if they approach their work from a strong point of view. They do this by referencing multiple sources, preferably those that present direct, firsthand information on a subject or event."

Fox, with its history of spreading the birtherism rumor, gets a little green check on this criterion. It also gets a green check for not repeating false information, although its commentators still refer to CNN as "Fake news CNN" multiple times a day. CNN has a perfect rating for its reporting, meeting all 9 criteria in NewsGuard's own standards.

Clearly, one problem is that commentators/op-ed folks seem to get a hall pass on responsible reporting where journalists do not. A quick scan of FOX reveals Lou Dobbs repeating the "immigrants voting in the millions,' rated a liar/liar pants on fire by PolitiFact," along with the news that a California regulation will only let children drink "milk or water at restaurants."

Over the week it took to write this analysis, however, I tuned in to a variety of sites whose values I oppose and whose news gathering skills I had assumed were inherently flawed and was surprised to find the amount of responsibly reported content and angles I had failed to consider. I will read more broadly in the future as a result.

But then... on FOXNews online, the video roll in the center of the website included a commentator who wondered along with his guest, a GOP senator, how Democrats could not support a wall on the southern border when ten terrorists a day are stopped at the border crossing.

That number seemed odd. A five second fact check revealed that seven people a day on the no-fly list have some kind of interaction with DHS, but that 85% of those are at airports not the border. Of the last 15%, some are by sea and the rest are split between the borders of Mexico and Canada. This kind of fact-checking can get exhausting. I found myself wondering anew, how many exaggerations of epic proportions does it take to remove a green check from a criterion?

Compounding the scoring issue is a blind spot where video is concerned. Separating news from opinion is one criterion, however, Newsguard only rates websites, not television. When video of commentators is distributed outside the website on YouTube, for example, and picked up by Google, it is not marked as opinion. In the case of Fox, although this is true of all video commentary, the label on the video is FOXNews, not Fox opinion. FOX is still green-checked on the separation issue. Should it change its name? 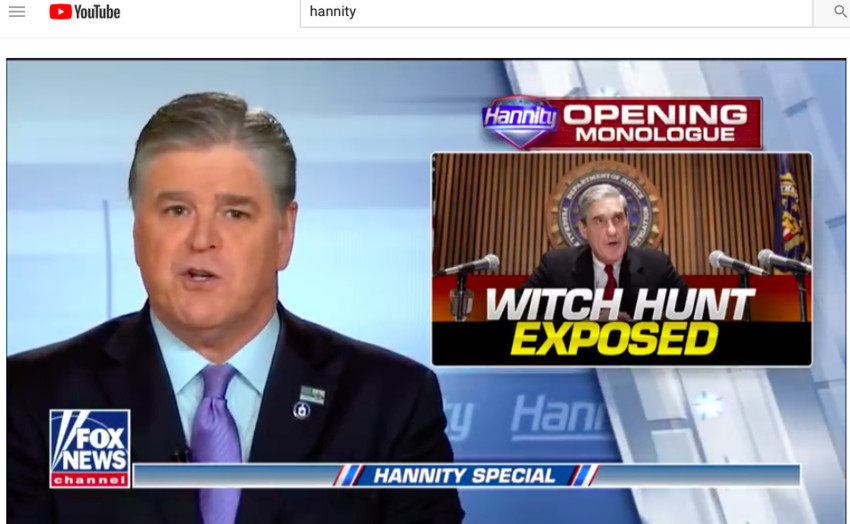 The news side of FOX also quotes the opinions of its own commentators as "news." Hmmm... 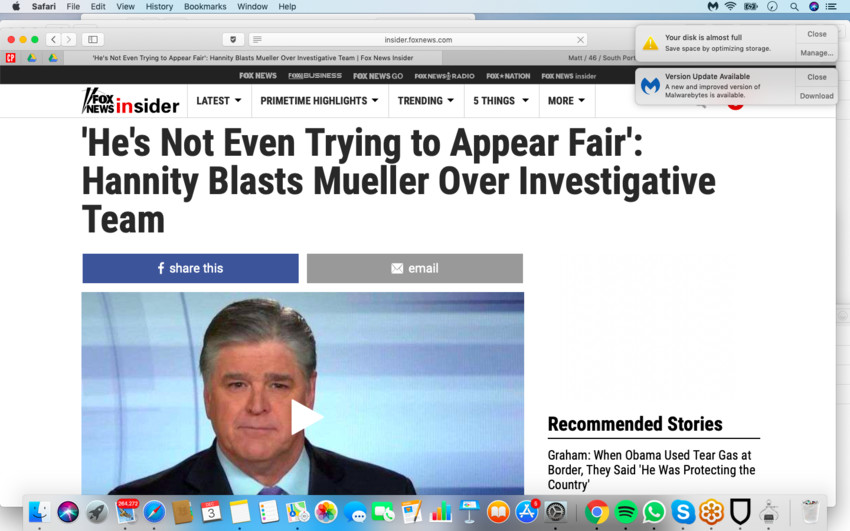 Finally, on video the background of content contributors is also much harder to find. And there is the uniquely modern situation of a president who lies publicly thousands of times, according to the New York Times, which has a perfect score on all 9 criteria. Exactly when does repeating the presidents allegations without any attempt at verification become irresponsible?

One can only imagine the discussions between the editors, analysts and co-founders on which media do a "responsible" job.

Brill said the team "applies the criteria unflinchingly. We don't get the luxury of liking or disliking the result."

Once you get past parsing differences between MSNBC, CNN and FOX, the ratings system works great for flagging media sites that are clearly bad actors and showing that stray bits of information came from a safe place. Here is an example of a repost of a local newspaper link on Facebook: 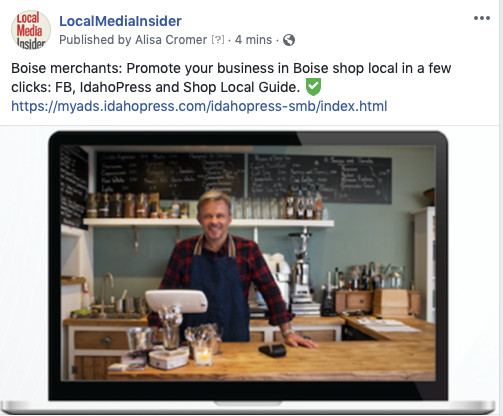 The end user who has signed up for Newsguard can be reassured that a promotional post is from a legitimate informational site. On the whole, in other words, it looks like the right system which does not solve all problems, but gets the job done. The editors and staff post their email on their website, so the project should only improve with debate.

The stakes are huge. A free press is a critical indicator of democracy, and the United States has already fallen to the status of a flawed democracy, tied with Uruguay, in the latest Democracy Index. Russia is not the only bad actor trying to influence elections via news hacks. Democratically elected governments in Mexico and the Philippines, have turned social media bots on their own people in an attempt to influence the vote. A credible scoring system that enables people to evaluate information is existential to journalism´s role in policing governments and telling our shared story.