After a banner year in 2019, a law reducing public notice requirements finally passes

In 2020 as state legislators adjourned or went on virus-related hiatus, it seemed as if attacks on public notice requirements would simply die out. Instead, in April, the newspaper industry received its first significant defeat in the last two years.

It came as a surprise after a long series of wins. Bills threatening public notice advertising were floated in Indiana and New York but died in committee. In Florida, Rep. Randy Fine (R-Brevard)  sponsored a bill that would have moved legal notices to a government website. The bill passed by the house but died in the state Senate.

Kentucky faced a similar situation when a 2017 initiative made it through the state legislature before being vetoed by the governor. It seemed all but dead, however, in April the legislature unexpectedly overrode the veto, according to the Public Notice Resource Center (PNRC).

The language affecting Public Notice laws was actually hidden in a budget bill proposed by state Senator Chris McDaniel (R-Covington). It authorizes governments and school districts in counties over 90,000 in population to publish most government notices on their own websites, instead of on newspaper sites.

It is ironic that with so many efforts to save newspapers - and the increased importance of local news during the pandemic - this spring Kentucky voted to punish newspapers instead.

According to the PNRC website, another loss for public notice revenue this year was a budget bill in New York state that allows Gov. Andrew Cuomo (D-NY) to use no-bid contracting on urgent projects, eliminating the need for public notification. 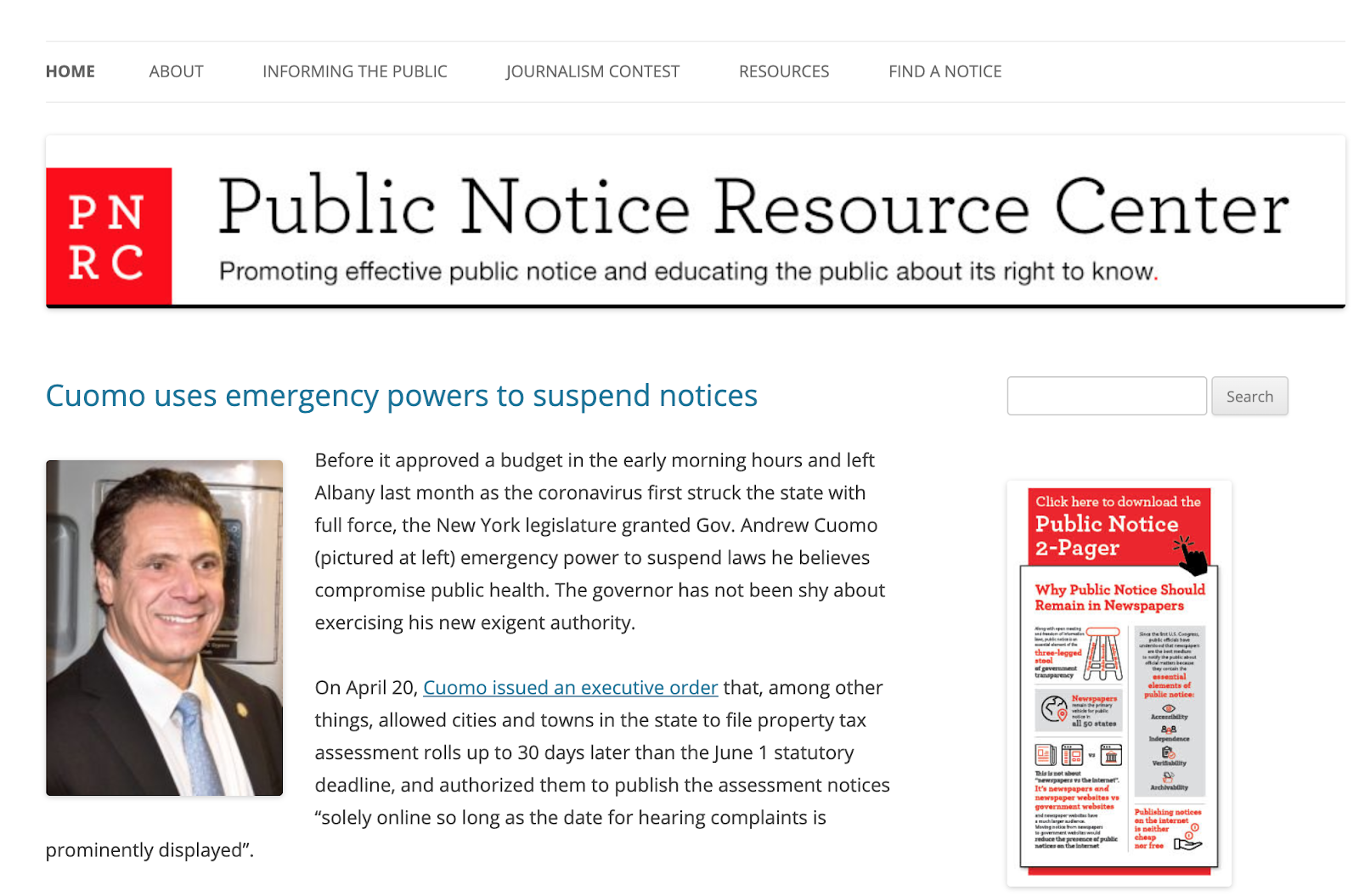 While there are numerous attempts each year, the newspaper industry has been luckier with past efforts to defeat these bills. 2019 was an “all clear” year for avoiding this type of legislation, according to PRNC’s annual report.

Of the 360 bills affecting public notices that passed in 2019 - including 80 bills signed into law -  most only added new notice requirements.

“None of the real stinkers - i.e., bills introduced in 11 states that would have removed most public notices from newspapers - even made it out of committee,” the report said.

Typically, most of the legislative objections to requiring newspaper publication start “when a legislator is not happy with the newspaper coverage,” said Richard Karpel, head of the Public Notice Resource Center.

“Not always, but I do think that’s often the case.”

A notorious opponent of the public notice requirements is Chris Christie, whose challenge to New Jersey’s law was ultimately overcome. A few years ago, Maine also faced down legislation proposed by Governor LePage that seemed designed to “punish newspapers” more than save taxpayer revenues.

A common argument made by legislators opposing public notice requirements is that the cost of the advertising is in effect a subsidy. They also claim that newspapers have failed to modernize to provide online access to information.

The industry is rapidly evolving in this area, however. New software from iPublish Media Solutions automates much of the process, keeping costs down, dramatically reducing errors and easing the process for all sectors involved with public notices.

This is a huge benefit to newspapers and states alike since regulations often specify diverse requirements, from the font style and boldness of the heading to the frequency of placements.

The new platform launched in Anchorage Daily News and the Bay Area News Group, with more deals in the works.

There is much at stake. Besides providing public access to government meetings, bids, and other information, paid public notice revenues are keeping many local news organizations afloat.

The Newspaper Association of America estimated as early as 2000 that public notices accounted for 5 to 10 percent of newspaper revenue, a number that is not easy to find, but which could be far higher today. We estimate that $3 to $6 billion in revenues was earned from  $63.5 billion pie in 2000. Now that newspaper revenues total around $34 billion, that number could be as much as 10 to 20%.

The PNRC expects a new set of state legislative attacks on public notice requirements to begin again in 2022 - just as the need for transparency - and revenue from Public Notices in newspapers will be more important than ever.