Case study: Tributes, a special section in print for obituaries

In 2016, Gatehouse planned to publish a special print section for obituaries as a way to fully monetize the franchise.

“I looked at how much traffic obituaries were getting on the website, I was absolutely fascinated. Obituaries are in the top five traffic producing sections in 80% of our newspapers,” said Bob Birkentall, Director of Online Verticals.

“We had all these ideas going around the room about how we could raise the rates. It is a category in which you can get away with (increases) and we were under a lot of pressure (to do so),” Birkentall said.

“We started thinking, how can we grow the traffic? Then we started circulating back to print …what if we had a special section?”

By 2017, the team was beginning to understand that operational issues were thwarting their plans. So Gatehouse turned to iPublish Media Solutions, the industry leader in self-service and advertising automation, to provide a platform that automated the process.

The “Tributes” platform created by iPublish Media Solutions allows an administrator to reverse publish a special section for a specific time period with existing obituary content in three clicks:  1. Log-in, 2. Input the dates selected for the obituaries to be re-paginated, 3. Enter the email where the PDF will be sent for proof. That’s it.

For the launch, Gatehouse selected six markets that had minimal increases in the past seven years and which were already processing about 20,000 obituaries a year via iPublish AdPortal’s Obituaries platform.

Next, they developed the design for the print section and decided to launch with a rate increase of $25.

The section also had to have enough weight and use-value to the funeral homes to justify the increase, so they settled on a minimum of six broadsheet pages and put a plan in place to help funeral homes understand the benefits. By including the name of the funeral home along with the deceased, as well as additional acknowledgment with a funeral home directory, they were able to explain the value of more exposure: a longer, ever-green shelf-life, high pass-along and an opportunity for the funeral homes to have additional communication with families who are customers. The newspapers deliver planned over-runs to their funeral home partners. 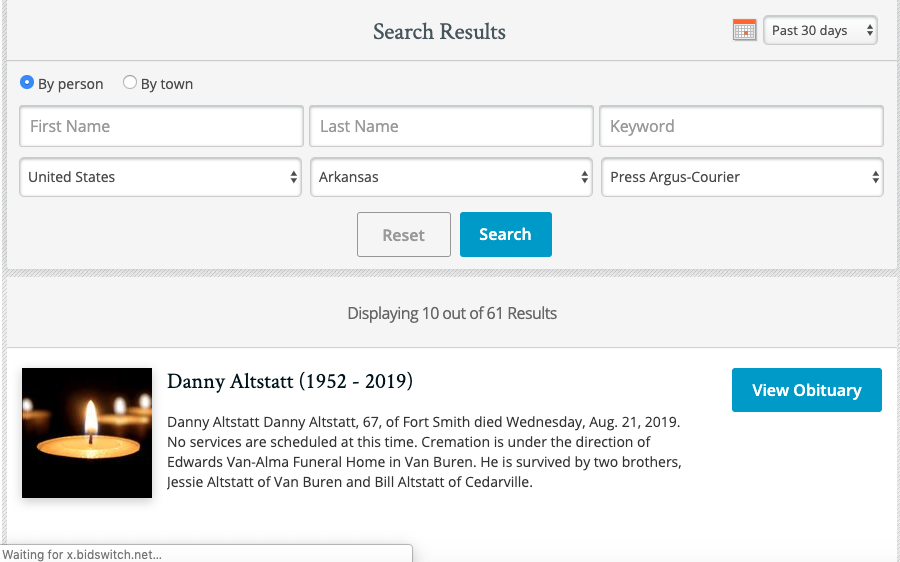 Gatehouse initially launched with an annual edition but evolved into an average of two or three per market per year. They set a goal of achieving $1 million by 2018.

By 2018, they had passed the $1 million revenue mark. Newspapers average two to three publications per year for a total of 21 across seven newspapers in the program.

Aside from some minor resistance to the price increase, “we had a lot of feedback and all of it has been positive,” he said.

“It is a highly profitable section, and we have had very good response from the community.”

Families also began ordering so many extra copies of Tributes that Gatehouse now prints another extra 2,000 copies per issue and distributes them through the funeral homes. This creates even more value for the funeral homes, giving them another touchpoint with their customers, the loved ones and families of the deceased.

“My feedback is that you have to run it more than once a year,” Birkentall said, so that families can see the section without waiting too long.”