Find a vendor
Join a peer group
Post a Job
Post an event
Endorse a company
Update your profile
Part 3: The rise of the micropolitan newspaper

The miracle in Jackson Hole is not the skiing, but the newspaper

Some local newspapers just seem to have superpowers

If you had to invent the perfect newspaper town in 2019, you might wind up with a an area like Jackson, located northwest Wyoming.

So how much does the super-success of the local newspaper have to do with the market, or are there other factors like management and strategy?

First, take a look at the near perfect newspaper town:

The population is about 23,000 countywide - large enough, but too small to attract broadcast competition. The closest local television news stations are nextdoor in Idaho.

Economically thriving? Check. The income is 3766% higher than the rest of the country. Winter tourism swells visitation to around 100,000 mostly high end skiers, and summer tourism adds even more; some reports indicate over 2 million will pass through on the way to national parks Grand Teton and Yellowstone.

“If you look at Jackson Hole you are going to see some crazy demographics,” said associate publisher Adam Meyer.

“Another interesting element is that we are so isolated that most people fly in,” he added. People who fly typically stay longer and spend more compared with drivable traffic.

“A lot of people are flying through Salt Lake, which also has amazing skiing just 35 minutes from the airport.”

Travelers’ clear affinity for the area - plus the hefty percentage of second home owners - adds to an appetite for local news.

Add to these ingredients a land shortage. 97% of land in Teton County, Wyoming is public land and real estate is red hot with the median home in Teton County selling for over $1 million.

Toss in a huge fluctuation in seasonal jobs that drives employment advertising, and top with a healthy retail base, sustained by all that tourism spending.

“If we were a Metro paper in Minneapolis or St. Paul, we would get 40% of our revenue from circulars. If one of those big box stories closes or shifts strategy, it blows them up,” Meyer said.

“We have mostly locally owned businesses with a connection to the community.”

The result is an 80 page plus weekly newspaper complemented by a 48 page plus daily six days a week. About 8 to 12 pages in the daily are classifieds, mostly real estate and employment ads. LocalMediaInsider estimates revenues in the $7 to $9 million range.

What internet? 80% of revenues are from print ads.

Is it even possible to “catch them doing something right” given these fundamentals? In other words, when we talk about why some newspapers succeed, does management in Jackson have anything to add to the conversation? 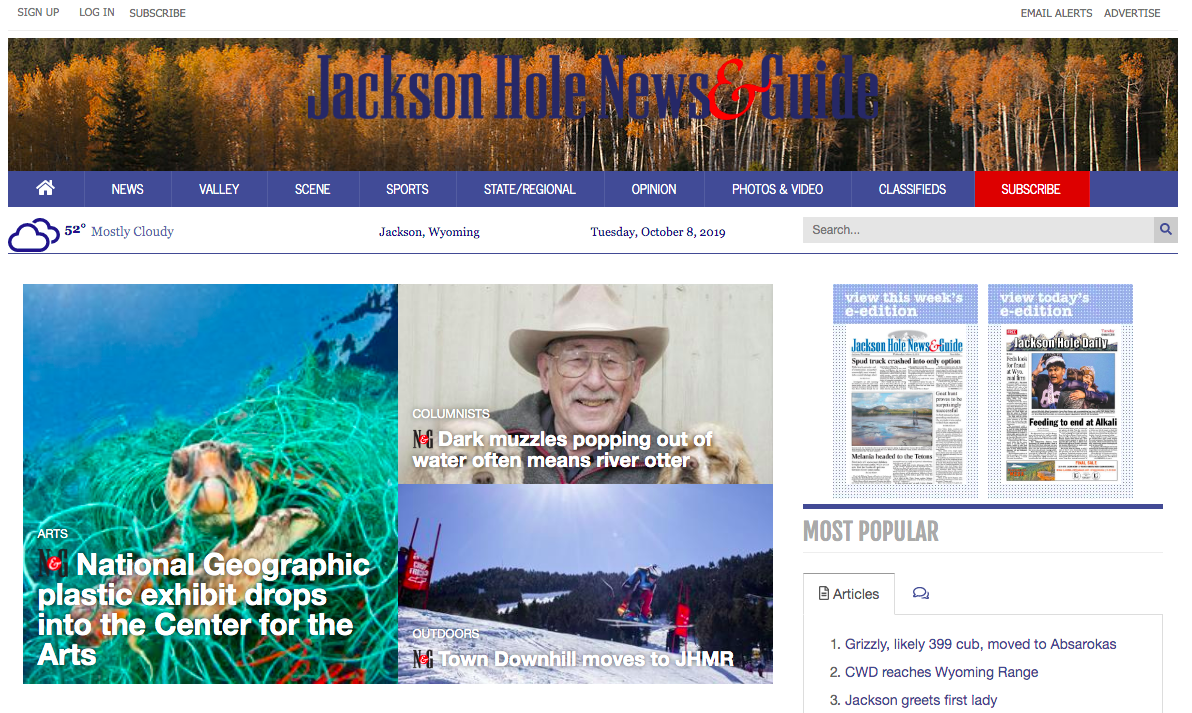 After spending an hour or so talking newspapers with Meyer, I begin to tease out what some of the extra magic dust might be, in addition to market, and it’s more of a discipline, or set of guiding values, than a strategy or set of tactics.

“I want everything focused on content and audience. Three legged stool, the formula, is  audience, content and revenue. If we don’t have all three firing 100%, we are in trouble.”

Part of his discipline seems to be avoiding distraction from these core drivers.

“We had someone offering video production for Google business pages, and asking us to partner. We said, let’s back up. Does it improve content? Yes. Does it build audience? No. Does it make money? Not enough. I’m not selling that for you.”

“We get all kinds of [potential technology partners] calling, but if it is only tangentially related products or services that we have to sell, it’s out.”

Investment in content that engages with the community, on the other hand, meets these criteria.

“Find me another newspaper with a circulation of 8,000 that has an environmental beat reporter,” Meyers said. “The community is obsessed with wildlife and environmental issues.”

“Instead of giving people who are in mourning a $600 bill, we say send us what information  you’ve got and a photo and we run it on Wednesday. People are very pleasantly surprised.”

In 2002, over a game of golf at the foot of the Teton mountain range (some accounts say it was dinner, but in any case the conversation was the stuff of legend in Jackson) the owners of two papers decided to merge, only to inspire a competing start-up, an alternative weekly, Planet Jackson Hole, which folded last year.

The evolution also created a unique paid circulation model. Like many of the successful micro-dailies we talked to, national and local news is physically separated. The printed daily carries classifieds, national news and syndicated content like cartoons and is free on the streets, while the weekly covers strictly local news, is the journal of record and sells for $1 on the street. 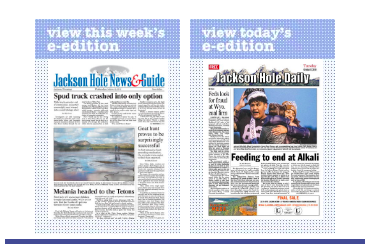 To Meyer, the great recession of 2009 that devastated so many newspapers, and last years Canadian paper tariffs which increase paper prices by around 20% were “curve balls” with “a lingering impact on cost structure.”

“It did make us pause and look at our business model,” he said.

Since then they have made some adaptations. A few years ago, the group bought a small start-up digital agency, Orijin Mediato, to diversify the revenue base and expand digital marketing services offered to local and regional businesses.

“If someone says they are going to cut back advertising and shift the money to build a new website, the sales rep can refer them to our agency.”

The newsroom now posts a fresh video every week, and the company added a revenue producing home and garden show.

“Everyone was talking about events about seven years ago. But they take a ton of time and energy and don’t always return a lot of revenues.”

Taking obituaries paid in the future remains a possibility. “We have a number of levers left to pull if we get in a funny situation.”

But their most recent initiative he says, has been to put a small ad on the front page of the print daily.

“To be honest, the biggest change I’ve seen over the last 15 years is the increasing battle for time, not just to cover the news, but to distribute it in multiple channels.

Meyer believes one of the x-factors for Jackson Hole’s success, one of the “essential nutrients” as Borrell puts it, is local ownership.

The News & Guide owner is the former COO, Kevin Olson. He and his wife Shelley, purchased the paper in late 2012 and Kevin is publisher.

“If we were part of a larger (chain), they might say 10% has to go to digital. You have instructions commanded from a remote location. Here we have the ability to work independently,” Meyer said.

“I get why newspapers sell. There is no succession plan. No one wants to move [into a distressed area]. The economy sucks. So corporate comes in and five are not performing so they kill them,” Meyer said.

“Look what happened at Digital First. They gut your newsroom, publish digital for free, watch circulation drop and wonder why they are not making money.”

“I’ll go to the mat on this. Mega-ownership of media is terrible. The mission of a large corporation is maximization of profit to the shareholder.

“As an independently owned newspaper, our job is to stay profitable and we pay close attention. But our mission? Our mission is to serve our community.“

“Conglomeration was the worst thing to ever happen to our industry.”