The alternative weekly industry, where I spent 20 years of my career in newspapers, was the media sector hardest hit by the internet. Now it has been nearly decimated by Covid-19, in what Nieman Journalism Lab calls possibly the “total annihilation” of the category.

The Stranger, one of the most beloved of local papers, started with a plea for help from Seattle in Feburary:

We need your help. The coronavirus crisis in Seattle is a major threat to The Stranger's ability to keep the city informed. We pride ourselves on having navigated many storms in the world of independent local media, but this time is different. 90% of our revenue—from advertising, ticketing fees, and our own events—is directly tied to people getting together in groups. The coronavirus situation has virtually eliminated this income all at once…

Within a few hours of the Nieman Journalism Lab article, its report was updated by an announcement that Isthmus in Madison, Wisc. and The Pulse in Chattanooga, Tenn. had suspended publication. 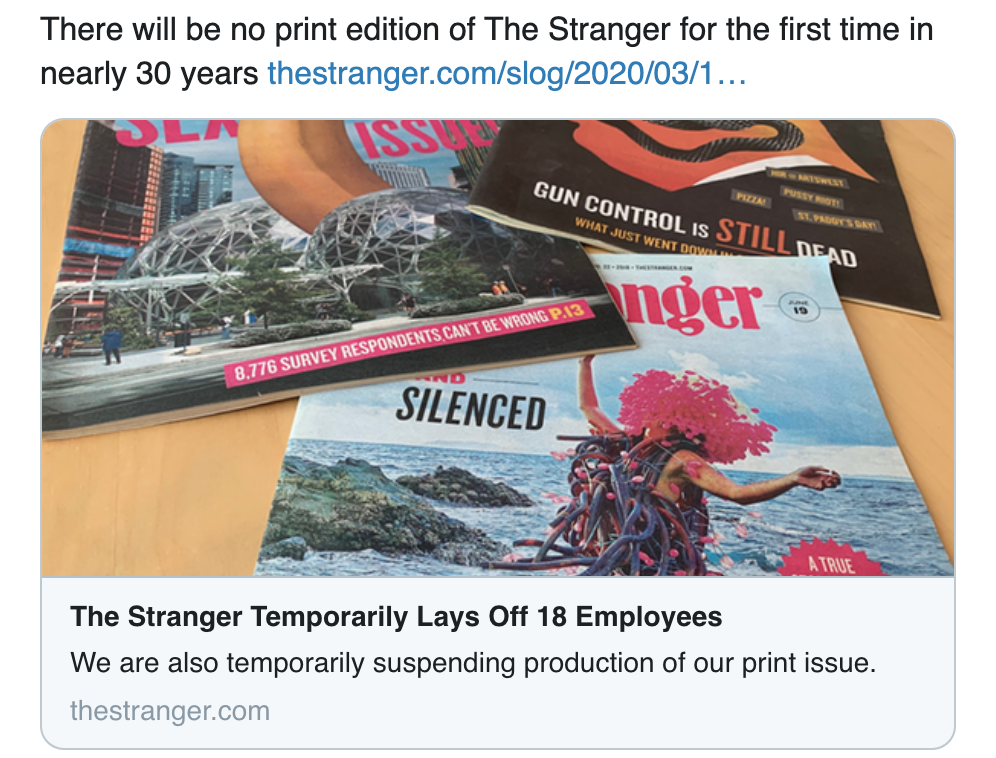 The alternative weeklies were so hard hit because of their dependence on the Arts & Entertainment categories - the same ones closed indefinitely by Covid 19. With few other categories to fall back on, it is hard to see a viable future.

While many still think of the alt weekly audience as young, it was actually composed of aging boomers who grew up with the likes of Dan Savage, and placed their first personals in the back of the book. The average age in the last Media Audit I saw was 43.

What these papers had in common in their heyday, however, was an immense cultural achievement:  A rollicking progressive voice that supported gays before it was a thing, dug into “truth to power” local stories, subscribed to the art of long form storytelling essays and relentlessly sustained the local arts community by covering their events and donating thousands of pages of “trade” ads.

We hope these venerable voices will re-emerge in new formats, led by publishers willing to reinvent the model and by writers and editors who have always been their spiritual leaders, folks like editor Tim Redmond of the now defunct San Francisco Bay Guardian, whose start-up blog 48 Hills is all that remains of the once prestigious newspaper.

Meanwhile, it looks like RIP to some of our alt weekly friends, whose legacy of fiery reporting and support of the arts made our communities better.