The Richland Source explains how to tune into the community

The buzzy term is “ghost newspaper.” Whether the legacy paper in any given market fits that definition is a matter of debate, but it’s clear that many local papers were shadows of their former selves, even before the devastating hit of the Coronavirus. This series is dedicated to the entrepreneurs determined to reinvent the local media in their communities.

Before 2013, no one could have predicted that Mansfield, Ohio, a charming-but-struggling Midwestern city in Richland County, population 120,000, would become a hotbed of innovation in local digital media.

It is now.  The countywide RichlandSource.com, also based in Mansfield, was started by Jay Allred, president, and his team in 2013,  and has turned Mansfield into a ‘go-to’ place often cited by industry observers when asked for examples of stand-alone, digital local news operations that are doing things right. 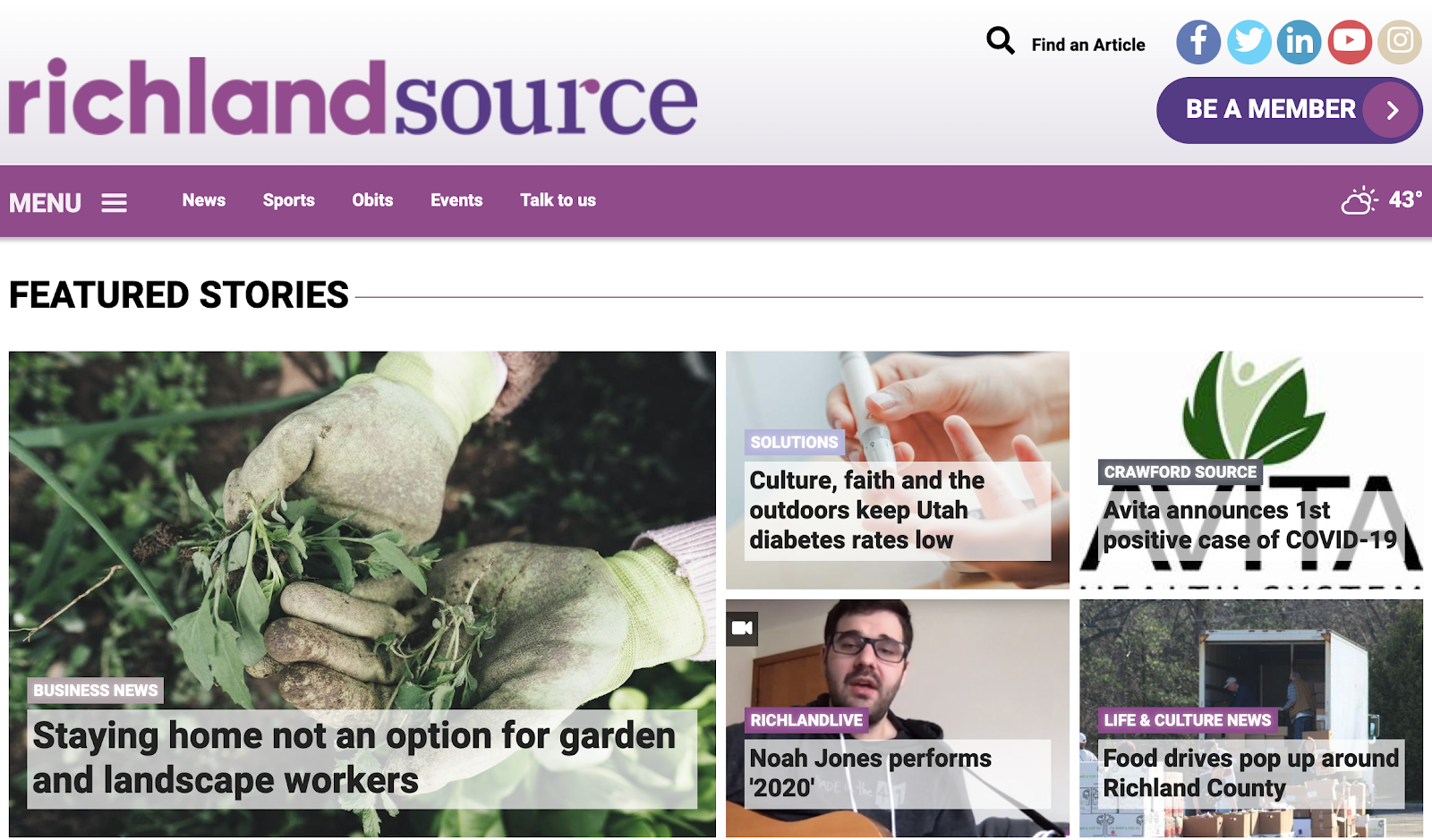 “We founded Richland Source because it was evident... that legacy media was no longer covering the whole story of our community,” Allred said via email.

“We chose digital-only to keep things simple and, frankly, because we didn’t see value in print.”

The Source takes a relentlessly solutions-oriented, upbeat approach. One of the values stated on the Source’s “mission” page, explains why their news mix does not include as much crime, under the heading, “Proportionate in tone”:

We report all sorts of news (including hard news like crime), but we work very hard to make sure what we report matches the proportions of our community. Here's what we mean:

The most recent FBI Universal Crime Report (2012) shows that the city of Mansfield had a total of 3,383 crimes reported to law enforcement. That's a lot, right? Sure it is, and the citizenry deserves to have it reported on. But the next number might surprise you.

If one assumes that each one of those crimes was committed by a separate individual and that every one of those individuals was a Mansfielder, we are left with 7.13% of our population engaging in criminal activity. Galion would be 6.07%. Shelby comes in at 4.56%. That means that in the worst of cases, well over 90% of the population is not engaged in criminal activity.

That is why our home page reflects the current local news, and the majority of the time that's progress, entertaining events, and the accomplishments of people, organizations, and businesses. We could drive a lot more page views with a crime-heavy focus, but that wouldn't be an accurate view of Mansfield and Richland County, so we don't do it.

It’s a theory many traditional editors and TV news directors might ponder.

Gannett’s Mansfield Journal, the main local competitor and part of Gannett’s  media network of papers and websites in central Ohio, “dominates the region in terms of number of titles and overall audience,” Allred said, especially since the merger with Gatehouse added three metro markets in central Ohio.

Allred made it a point to say that he does not consider the Journal a ghost newspaper and respects the efforts of their local employees.

The Mansfield Journal’s reported print circulation of around 7,500 daily and 13,000 Sunday in a county of 120,000 residents and nearly 48,000 households mirrors industry-wide declines. Print deadlines also are early because the press is in Indianapolis. Still, the paper’s website appears to be holding its own against the Source. According to statistics at SimilarWeb.com, the Journal averaged about 278,000 visits per month in the six months ending March 1 versus 239,000 visits to the Source.

The Source’s digital presentation is strikingly different from the cookie-cutter sites Gannett deploys across its national network of sites, including the Mansfield Journal. The Source uses subhead, “Area History”, “Local elections” and “High school boys basketball” and a more visual format that promotes stories with five images above the fold, a format that helps “sell” the stories.

Whether viewed on a laptop, tablet or smartphone, the Source’s site does a better job of something that’s hard to quantify but obvious in observation: “feeling like” part of the community.

Beryl Love, editor of Gannett-owned The Cincinnati Enquirer and Ohio Regional Editor for Gannett’s USA Today Network, is well aware of The Source.

“I think competition is good and wish we had more of it in small towns across the country,” Love said by  email. “It inspires all of us to be more relevant and innovative.”

He acknowledges that Gannett has made deep cuts.

“It’s hard to say we have enough ‘journalistic muscle’ because you always want more,” Love replied. “But as we have downsized and restructured our newsrooms across Ohio over the years, we have taken advantage of our scale to preserve as many local reporting resources as possible while streamlining management and regionalizing functions that aren’t essential locally.”

That’s a bet that many of the newspaper groups are making. It’s a bet that the local newspaper does not have to have its traditional “Chamber of Commerce presence;” that it’s not essential to have a local publisher, executive editor or ad manager in places such as Mansfield as long as the stories get covered.

And that is also where the Source sees its major advantage:  They’re embedded into Mansfield life.

While the both websites contain decent volumes of local news, the Source is simply deeper locally. The Mansfield Journal’s website lists nine staff members, all news-side. Allred reported a staff size of 15, now working from home, including an in-house marketing agency, although the site has no online staff directory.

The Source also does much more to gather feedback, prompting readers to engage as in this example from the home page of its site: 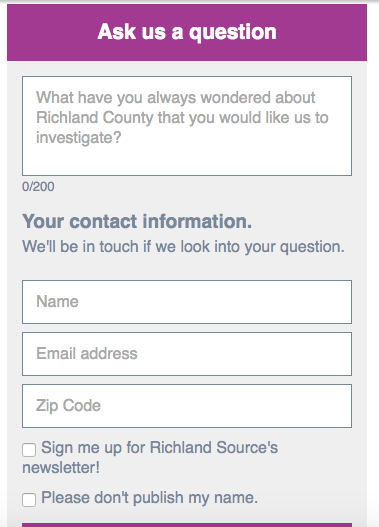 “I think what we’ve done that’s mattered the most overall was deciding very early, with great intention, that we would work very hard to listen to readers and community members,” Allred said. “It’s allowed us to build real and genuine relationships with our audience. That has translated into trust, customer loyalty, and a growing membership program.”

The effort has paid off in impressive traffic numbers, and visits to the site approach those of the larger, print-based newspaper.

Getting readers to invest in their success has been critical. “Ask them what they want. Deliver that. Remind them you did it. Ask for their support,” Allred said.

Unlike many news websites, the Source’s stories aren’t behind a paywall, but it pushes a membership model at price points ranging from $4.99 to $19.99 per month with expanded benefits at each level, starting with admission to Source events and leading to advertiser discounts and appeals to altruism that include support of local service organizations who receive advertising credits based on member support.

Be a member clicks to an aspiration page, promoting the value proposition that supporting the newspaper contributes to the community: Change happens one story at a time.

Then there are three levels of membership, focused on engagement with the community on a variety of levels. The lowest $5 a month Starter Membership  entitles members to attend events. “You’re saying, ‘Look, I get it. Nothing good happens for nothing.’ That says a lot. Our entire team appreciates it.”

For $9.99 the Supporter Member also gets discounts from area merchants.

For $19.99 Pillar Members can designate advertising credit to the non-profit of their choice.

Here’s how the packages look:

Another core source of income is business sponsorships. A button at the top of the page promotes  “Newsroom Partners” instead of “Advertise.”

The lists of potential benefits  includes everything from logo placements, profiles of why they are supporting the Source, monthly communication and quarterly meetings, employee memberships and attendance at a banquet in honor of sponsors:

“You plus 3 others are invited to our annual celebration of the impact of community journalism. We’ll highlight the work you powered, the sources who made it happen, and the solutions we found in an innovative and fun way.

Allred describes “the ongoing troubles of the local news industry in general” as his biggest challenge, but the Source has made headway by diversifying revenue streams early on, with substantial revenue directly from his membership model and partnerships with local organizations.

He declined to specify revenues or profitability. However, in a February column under the headline “Support of Ohio’s independent local journalism reaches new heights in 2020,” Allred wrote that “individual members and corporate newsroom partners have invested over $200,000 in the work of the Source newsrooms in Mansfield, Ashland and Mount Vernon in 2020.” He invited readers to learn more in a detailed annual report about how they practice what he calls “solutions journalism.”

Both Allred and Managing Editor Larry Phillips are also area natives, another advantage. Allred’s LinkedIn profile notes he’s a graduate of Ashland University and once worked as production coordinator at the Mansfield News Journal.

“We’re glad to be a small part of what’s become a nationwide movement,” he said.