Google is romancing local media. Here’s a cheat sheet on how to get involved

Like Facebook and Apple, Google has been reaching out to partner with local media companies. Google is in the business of selling both advertising and data made especially valuable because of Gmail's ability to attach the date of registration. However, unlike Facebook, its main goal is not to keep people on its own platforms as long as possible. There are a number of ways hit programs seem more palatable. Here is a cheat sheet on what’s in it for local media.

What it is: Google Consumer Insights allows publishers to drive subscription and other B2C revenues. It visualizes Analytics data from the standpoint the of e-commerce driven subscription  funnel below, surfacing actionable insights on how to convert users to customers and improve the site experience

Some of their findings are here, including how to remove friction and focus on the key benefits.

Business Insider has used the tool for 150% revenue growth in one quarter. Lee Enterprises tripled theirs month over month and increased visits to subscription pages by 150%.  It is also used to boost newsletter signups by adjusting the location of the signup box and simplifying the requirements.

To do: Visit the site at at https://newsinitiative.withgoogle.com/training/datatools.

What it is: Free courses in a variety of topics, including fundamentals for reporting, publishing and monetization for publishers, multimedia storytelling, investigative reporting and verification.

To do: Go to this site for all of the courses

What it is: The data lab is a training, testing and experimental project in conjunction with Local Media Association, who privately invited 21 companies to apply and accepted 10.

“We started last April with in-market research, and data assessment, and will spend 3 months on site strategy, meeting to share data and providing best practices. By August and September, we will have tested learnings that will be reported out.”

Additional programs will start accepting applications and will be open to all media.

“The program will start with data collection and management. We will still only involve a few companies… maybe close to 10. We want a diverse group, not wildly different, but not just the biggest newspaper publishers “

What it is: The tool offers a “two click to close” purchase option. Google is actively looking at additional partners including 17 newspapers by summers end. 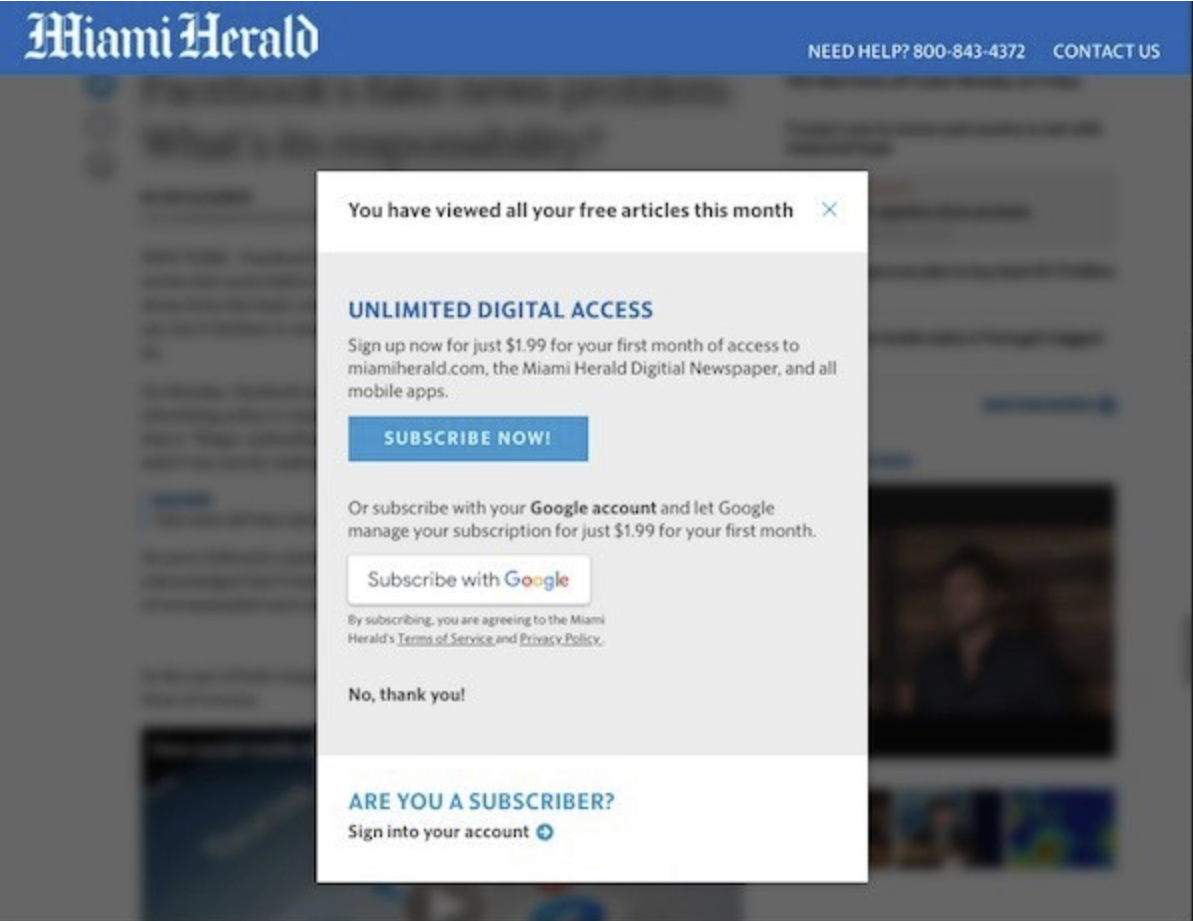 What it is: Like Facebook, Google has also reached out to the local media industry in the past year. The Google News Initiative proposes to spend $300 million over three years to support 87 projects in 23 countries, with 312 submissions in an open application process (unlike Facebook).

The goal is to help strengthen video capabilities and experiment with new formats for video journalism. Local recipients include Advance Local.

To do: Keep an eye on the newsletter or reach out to the heads of media partnerships.

What it is: Google offered a variety of partnerships with individual publishers to develop specific business strategies. The case studies are at this link: https://newsinitiative.withgoogle.com/success-stories/

They include a native ad program at the New York Times, using Google play for subscription revenue at LeMonde and a Google-based Programmatic component at Media Post.

McClatchy recently secured GNI funding for starters in three markets that are news deserts, called the Compass Experiment. Google claims they will not influence McClatchy’s news management, but will only help test new digital models. The idea is to use these markets as news labs in search of a business model.

“For better or worse it is an attempt by Google to pick markets to test new brands.”

Downside: One aspect of Google and/or Facebook funding journalism and media companies that makes a few industry analysts queasy:  “If they can get sites off the ground without influence over covered or news. I’m ok,” Williams said of the issue. “Let’s be honest. We have not found a sustainable new model. We desperately need help to buy time and patience to test models in smart ways. If a company like Google is willing to step up to help by intervening on the content side, I think that is a test worth doing…”

“We can have all of those conversations that you want. But if we can’t find a sustainable model the journalism is not going to get done.”

To Do: Its a great time to develop a relationship with Google. Contact David Brooks, Head of Local Media partnerships, dbrooks@google.com and Chrissy Toole chrissy@google.com. It also helps to reach out via the Subscribe with Google program, McClatchy was invited to collaborate after participating in the Subscribe pilot.

Another tip is to sign up for The Google News Initiative newsletter here https://newsinitiative.withgoogle.com/success-stories/

What it is: A $50 million program over two-years in five areas of the world open to an organization of any size. The application window is now closed for 2019

What it is: Not new, but in the mix of Google’s programs, Google Amp is the company’s largely successful attempt to compete with Facebook Instant articles. A way for publishers to create mobile-friendly pages that load speedily, increasing traffic and engagement. Several publishers have reported that as a traffic driver it exceeds Instant Articles. Overall it helped Google overtake Facebook as a driver of publisher traffic; Google now supplies 42%.

Downsides: Like Facebook, the ads on the format are limited and the user is not on the publisher’s own website. The trade-off in the improved customer experience (traffic) versus conversions is not clear cut according to an article in Digiday.

It is worth testing CTR’s and especially useful for driving subscription program.