Spokesman Review uses Wehaa platform to add $28,000 to the buy

The Spokesman Review wanted to build and increase revenues for a partnership with the largest live RV show in the area, Inland Northwest RV Show. ”We built the show [together]” throughout years of the partnership, said Scott Baumbach, Classifieds manager. However, another RV show created by a single dealership with three locations had scheduled a similar show on the same weekend. The Inland Northwest RV Show was looking for a competitive advantage that would build the live event even larger.

The Spokesman called on Wehaa, the vendor of their exclusive auto vertical, to help with execution. “Virtual Sales Event is a turn-key solution that allows media publishers to host virtual and in this case ‘physical’ sales events”, says Kevin Collins, VP of Sales at Wehaa. “We were eager to see how our solution would transition from cars and trucks to RVs,” added Mr. Collins.

First, the five participating dealers were allowed to post ten RV’s each on the Virtual Show “preview site” two weeks before the show to “tease” the live event. 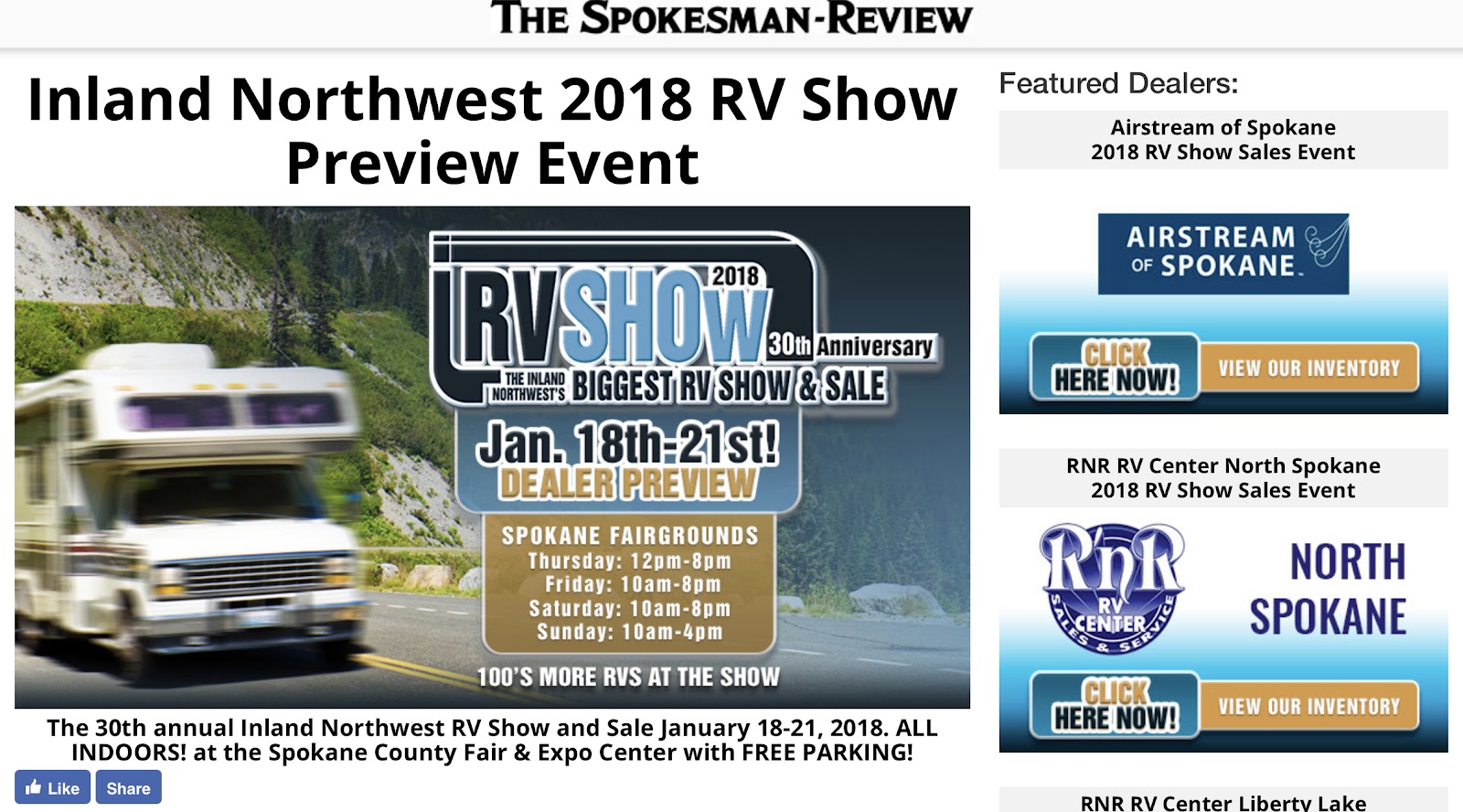 The number of RVs shown in the preview represented only 25% of the inventory, so potential buyers still would not feel that they had “seen everything.”

The full virtual sale site launched simultaneously with the live event. It included all inventory from all four dealerships, about 160 RVs and camper trailers in all. This allowed the dealers to showcase all the inventory, even vehicles they were unable to display at the live event.

The promoter paid extra for the virtual show and related promotions, including full-page print ads in a special print section, targeted online ads and owned media ads for a total of $18,000 as a packaged buy.

Here’s a link to the special section, also reverse published on the Wehaa platform.

The Spokesman also upsold its own print and automotive classifieds to the RV dealers for $2,500 each. Packages included:

In return for the partnership, the media also received mentions on radio, banners and the PA system at the event.

“We were challenged with taking an established annual event and making a seamless transition, melding print with web and dynamic social media integration”, says Mr. Collins. The creative imaging strategy changed during these three cycles:  virtual show preview, actual event and a virtual after-show. Not a simple task for newspapers these days with print resources stretched thin. “We were able to change the digital components and reverse publishing print ads on-the-fly to accommodate three event cycles allowing The Spokesman to focus on selling,” added Mr. Collins.

The virtual sale and additional promotion paid off in taking the show to a new level. The show promoter reported the highest live traffic in 30 years and the 2nd best year in sales.

The turn-key solution from Wehaa provided all the graphics work, event landing page, dealer landing pages, inventory banners and digital-to-print reverse publishing without the need for a feed from the dealers. This allowed The Spokesman to focus on selling the event and didn’t drain their resources. Wehaa also created dynamic ads on Facebook and Instagram, and drove geo and behavioral targeted traffic. The dynamic social traffic targeted users actively looking at RVs and campers who lived within a 30-mile radius of the RV dealer.

The newspaper received $28,000 for the tent sale and other promotions over the weekend, and estimates they ran $15,000 in cash and trade promotions in return.

All 4 dealers still list their new & used inventory on autos.spokesman.com. One dealer, R&R RV,  has continued with ROP and digital advertising as well.

“We did so much extra promotion” to drive traffic for the first year of the virtual event. But it has really paid off,” Baumbach said.

The next show is scheduled for January 2020.