Helping local media get through the COVID-19 crisis

“I started hearing our clients were losing 30 to 80% of print ads because of the shutdowns, and thought, ‘Wow, we have to do something to help them recoup some of that money.’”

The Creative Circle team brainstormed and came up with several ideas. They would launch a series of specialized web apps to generate new print and web revenue based on coronavirus-related topics. “What’s Open” was the first “most urgent” offering. They built the app in 4 or 5 days, announced it to their clients in late March and began selling it to non-clients by April 1. The first sites launched in 10 days “from concept to live.”

One of the first papers to launch the platform was Yourvalley.net, in Arizona, one of about 20 newspapers that launched at the very beginning. Roughly two months later, more than 200 newspapers are using it.

“We wanted to find something [newspapers] can do really well and was easy to deploy and self-service because we knew no one had many resources to spare,” said Ostendorf. “And this was something all communities needed badly. It was an important public service.”

“This information was all over Google and Facebook, but pulling it together in one place is something a local paper can do better than either of those platforms,” he added.

“Newspapers can still be leaders if they pick the right opportunities. And answering the question of what’s open now – and doing that at a platinum level – will pay dividends for newspapers that do so for years to come.”

“What’s Open” is essentially a self-serve directory with three upsells to featured listings, print and deals. It also offers sponsorships.

Here’s how it works:

Newspapers market this as a free public service. A business comes to the newspaper’s site and fills out a form that takes less than a minute to complete. And that listing is free. 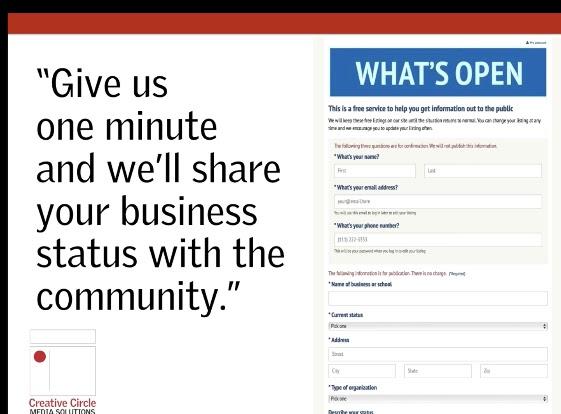 But as part of the process, businesses are offered three upsells:

1. Premium listing. The first upsell is a classic upgrade that allows the business to add features such as contact numbers, a logo, social media links, photos, web links, a downloadable menu and featured display in the listing. 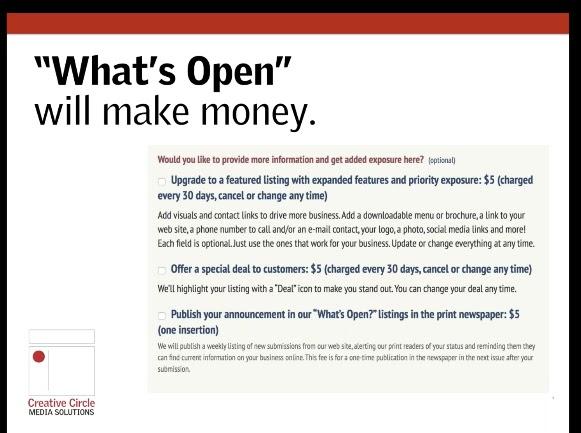 2. Deals. The second upsell allows them to offer a deal or discount which also gives their listing a green badge to draw more attention.

3. Print. For another additional fee, their listing is published in the print edition. 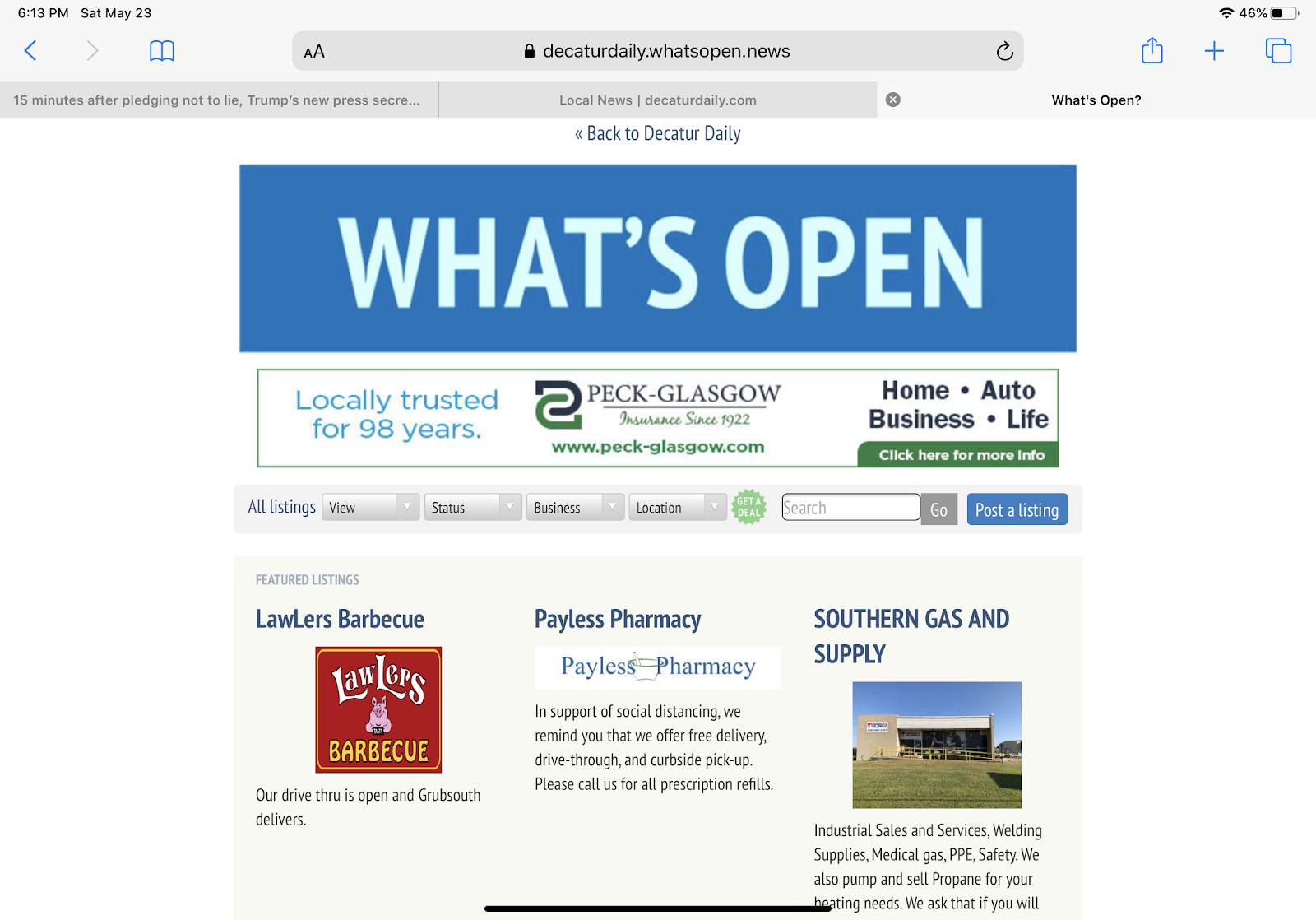 “All of our apps we release this summer will be web-based but have both print and web components,” says Ostendorf.

The newspaper sets the pricing, although Creative Circle offers recommendations based on their focus group research and what has been working.

The biggest challenge has been the need to add the mega-stores manually, as they are less attentive to local newsfeeds and self-service options, but it has been very popular with small businesses.

“When papers turn this on they literally get dozens or hundreds of small businesses almost immediately. And they aren’t just stores. They’ll get a plumbing contractor or a house painter, who are desperately trying to get the word out. Doing this kind of thing now expands the number of businesses that will do business with you. They need you now,” Ostendorf said.

Publishers are telling Ostendorf that 90% of the businesses posting were new advertisers to their newspapers, so even as the crisis eases, newspapers will have connected with a lot of new prospects for future business.

“We are collecting data from all these small businesses that you helped in this crisis,” said Ostendorf.

The widget can be placed on any website, and customized for specific industries. Newspapers have the ability to change the name and colors.

One of the most successful newspapers, Sun Community News, did a good job at promoting the initiative that included radio commercials and house ads. The result was new connections to hundreds of businesses, including some outside their normal distribution area.

The revenue model is either a revenue share or a licensing fee.

In six months to a year - when and if the crisis has abated - the businesses can be converted over to Creative Circle’s Shop Local business directory platform.

Creative Circle has also launched “Honor My Grad,” following a similar model of a free, public service listing for any graduate – high school, college, elementary or kindergarten. Upsells allowed parents to publish a listing in print and create a greatly enhanced listing online.

“Our focus group research with parents and school administrators revealed a huge, pent up demand to do something for 2020 grads and this gives parents the option of building a whole page about their kid and then privately invite relatives or friends to contribute,” said Ostendorf. “Again, many papers got hundreds of grads in a few days and many schools helped them promote the option.”

Creative Circle will roll out four more COVID apps this summer. Next up is one honoring the big and little heroes who helped others through this crisis. That will be followed by a pet contest with a coronavirus twist and apps centered on working from home and homeschooling.

“All these apps have a long shelf life and can continue generating revenue and eyeballs throughout this crisis,” said Ostendorf.

Lots of papers rolled out listings of business closings and standard graduation listings but Creative Circle’s long history as a design firm and the first software CMS vendor to provide user-contributed content helped them do something different.

“The key was that we came up with something very customized and unique for each one that gives it a hook and makes it stand out. Then we made sure to make it easy on the newspaper staff and the user,” said Ostendorf. “We also did some focus group research with each one to make sure we captured the right features and approaches.”